Enchanting Tales from Down Under 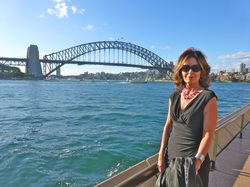 Bonnie recently traveled to Australia and New Zealand. This is part 1 of Bonnie's blog about her trip.

My recent trip through Sydney Australia and New Zealand was enchanting. While it took fourteen long hours in the air to get there, this spectacular city made the journey well worth the time it took to get there. Our tour started with meeting the driver/guide from Cannon Shuttles at the Sydney International Airport. He took my travel agent colleagues and I on a short city tour en route to Bondi Beach, a area renowned for its beautiful ocean setting. We drove by different sections of the city such as King’s Cross, colloquially known as “The Cross,” which is the red light district. It is dominated by bars, cafes, night clubs and strip clubs. We also drove by an area called Paddington, which has a distinctly European flair and is one of the city's best fashion melting pots.

Our tour began with a trip to world famous Bondi Beach. After we arrived, we took a leisurely walk along a walking and jogging beach path, taking notice of the sunbathers and many families with children, all enjoying a leisurely Saturday afternoon in the sun. We stopped for a snack at a beachside cafe, where we had the opportunity to sample the favorite Australian food, Vegemite, a dark brown food paste made from brewers’ yeast with various vegetable and spice additives. The best way to eat Vegemite is to spread a piece of toast with a little butter, then spread a little vegemite on top. It tastes incredibly salty so a little goes a long way. After about an hour’s stay at the beach, we headed to our hotel to check in and freshen up for the evening’s activities.

Our hotel, the Sheraton Four Points, located in Sydney's central downtown area, overlooks Darling Harbor. The hotel is just a short walk from the major entertainment and shopping district, including the Sea Life Sydney Aquarium and Chinatown. That evening, we were given tickets to see the play South Pacific at the Sydney Opera House. Attending some event or play at the Opera House is a must do while visiting Sydney. This multi-venue performing arts center, situated on Bennelong Point in Sydney Harbor, very close to the Harbor Bridge, is an architectural marvel with its sleek modern surfaces rising into the sky. A climb over the bridge is another must do while visiting this city. While we were there, the city happened to be celebrating the Opera House's 40th anniversary, so on one of our evenings there, we were treated to a spectacular display of fireworks over Darling Harbor.

Day two of our visit to Sydney consisted of an all-day excursion to the Blue Mountains, with a stop on the way at the Featherdale Wildlife Park. It began with an early morning pick up from our hotel by Australian Eco Adventures Luxury Tours. We were privileged to have the owner of the company as our driver and guide, who was a walking Book of Knowledge about the history of New South Wales and about the places that we would shortly visit. We stopped to visit the wildlife park, where we could get close to the koalas and feed the kangaroos and wallabies. Our guide explained that a joey is a baby kangaroo, and male kangaroos are referred to as bucks, boomers, jacks or old men; females are referred to as does, flyers or jills. The park also had many strikingly colorful peacocks, a dingo, a crocodile and a Tasmanian Devil.

We continued on to the Blue Mountains. The highest elevation is 3,901 feet and is densely populated by oil-bearing Eucalyptus trees. The mountains are called blue because the extensive Eucalyptus bushland gives off oil from their leaves, some of which merges with the atmosphere to form a distinctive blue haze. Next we visited a place called the Waradah Aboriginal Cultural Centre and learned about Australia's indigenous culture and history. Our group also got to ride one of the world’s steepest rail lines—with a 52 degree incline. The custom designed carriages allow passengers to “choose their own adventure,” adjusting the seated position up to 20 degrees, which creates a real cliffhanger experience. Looking out from my carriage, I felt like I was about to tumble out. This ride was quite a thrill.

On our way back, we stopped for lunch at a local golf club and got back in time to freshen up before the evening's festivities. That evening we were treated by Captain Cook Cruises to a three-course contemporary Australian feast, accompanied by entertainment and a cruise around Darling Harbour—with the most glorious views of the city lights of Sydney. The Captain's Dinner Cruise provides an elegant way to dine afloat and a total dining and entertainment experience that made our evening truly memorable.

The next two days we spent engaged in a variety of activities. We took an early morning guided walking tour along Bondi Beach of an annual event known as Sculptures by the Sea, which is the world’s largest free-to-the-public sculpture exhibition. It featured some of the most diverse and comically absurd outdoor sculptures I had ever seen. Also we participated in the famous Sydney Bridge climb—for those who have a adventurous spirit and are not afraid of heights—and a walking tour of an area called The Rocks. This guided tour is an ideal way to learn about the history of Sydney’s first European settlements at Millers’ Point and Walsh Bay, which began as a colony supported by convict laborers and later flourished as an important port- side village. Merchants lived beside soldiers, coal lumpers, nuns and working men’s families. Today, its history is revealed in the newly restructured wharves and storehouses, which includes condos with a harbor-side view, PR firms, theaters and restaurants.

On our last evening in Sydney, we dined at the Sydney Tower Restaurant. The Sydney Tower is the second tallest observation tower in the southern hemisphere. The restaurant, with uninterrupted revolving views of the city, offers delicacies such as crocodile and kangaroo rump. I highly recommend arriving just before sunset to take advantage of the stunning views. Afterwards, it was a short walk back to the hotel and an early morning 4 AM pick up for Sydney airport, where we would depart for a five-day tour of New Zealand, with four nights in Queens Town and one night in Auckland.

Our schedule included taking in a great many attractions, so our pace was brisk, but we thoroughly enjoyed our time down under. Special thanks to Celebrity Cruises, Air New Zealand, Destination New South Wales and New Zealand Board of Tourism.

Our specialty cruise experts will answer all of your questions, and help you get started. Your personal travel planner will help you plan the cruise vacation you've been dreaming about. With Travel of America at your side, you'll enjoy unlimited, personalized service and attention from the moment you contact us to the day you arrive back home.
Start planning today! 1-800-228-8843

Discover the World With Travel of America

Don't miss a single offer! Sign up today to receive our latest and greatest deals delivered to your inbox.